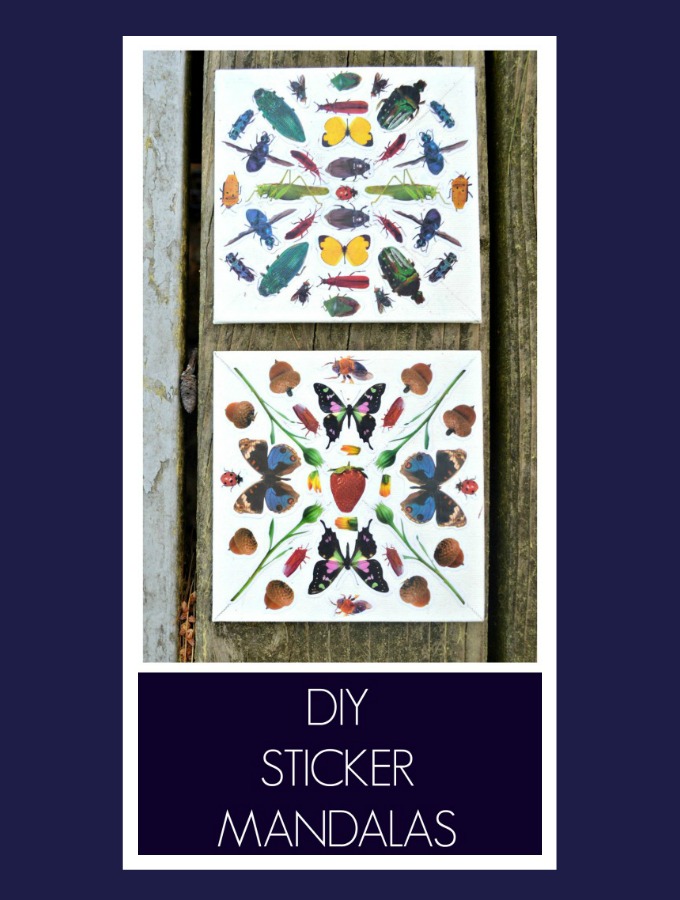 ***This post contains affiliate links.  If you click on one and buy something, I may receive a small commission***        I have a fun rainy summer day craft for you to share with your kids!  I made DIY Sticker Mandalas.  I would say your early tween to tween age kids will like this, but a focused little one could probably do this, too.  Do they make focused little ones?

If you’ve been following along, you’ll know I was inspired by this project from Honestly WTF.  That one is a lot larger than what I made and infinitely more intricate, but I think I’ve captured the idea in a scaled down version that should be fun for kids to make while not taking a super long time to complete.  I would set aside 30-45 minutes to make one of these guys.

Stickers – a couple of things to note: 1.  Don’t buy puffy stickers  2.  You will need multiples of each sticker you intend to use.  If you choose to do something larger scale, you may need several multiples of each sticker.  For my small Mandalas, I used stickers from this book from Amazon and it worked well for this project.  Bugs happens to be the theme I chose, but there are lots of others to pick from!

Draw an X from corner to corner of your canvas in order to find the center.  Make it as faint as possible so you don’t have much to erase at the end.

2.  Starting from the middle point, start placing your stickers.  The idea is to make a symmetrical graphic.  You’re sort of making each side a mirror image of the opposite.  I think the pictures will explain better than my words can.

3.  Be an artist.  The canvas is forgiving and you will be able to pick up  and replace your stickers.  I placed and replaced and swapped out stickers several times before I got it the way I wanted it.  Also, don’t be afraid to trim your stickers.  Notice that none of my bugs have legs or antennae?  Yea, I chopped them off.  They just didn’t look right, so after finishing the 1st pass at the 1st Mandala, I removed every sticker and cut off all of their legs and then replaced the stickers and was much happier with the results.  That’s called art, people.

4.  Erase any hint of your pencil lines that might still be peaking through.

5.  Seal with a nice thin layer of Mod Podge.  My stickers actually didn’t like sticking to the canvas by themselves, so the Mod Podge forced them to stick and gave them a nice clear protective coat.

PS – If you’re super messy with your Mod Podge (as I tend to be) you can reference this post for how to remove it!)

And here they are in their natural habitat (read in your best Steve Irwin (RIP) voice):