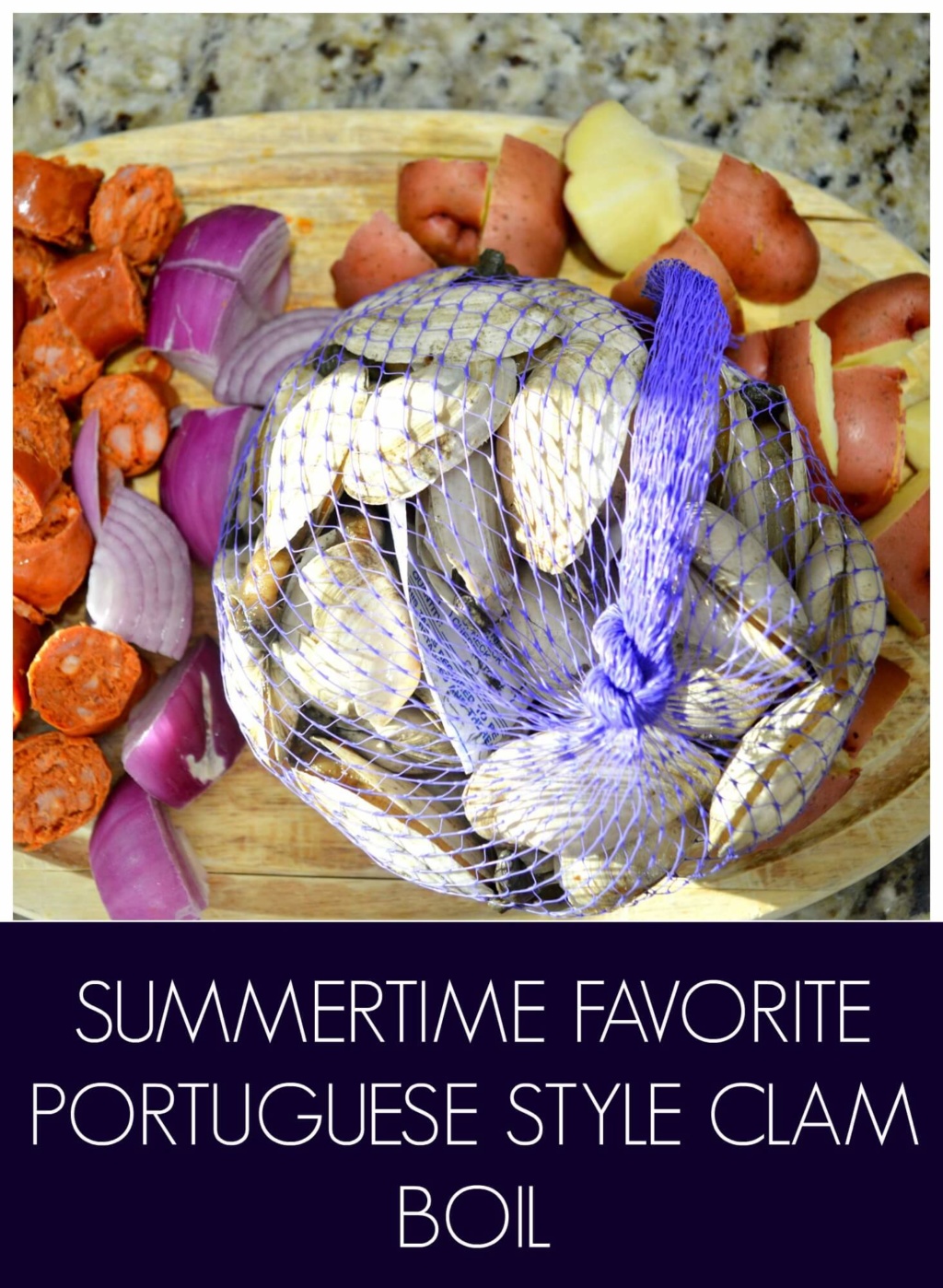 You know how foods can evoke memories?  This summer recipe – Portuguese Style Clam Boil, does that for me.  Growing up, once or twice during the summer, my dad and I would split 5 lbs of steamers while lying on the family room rug watching tv.  It is one of those little things that only my dad and I shared.  Not only would no one else in the house eat the little clams; they didn’t even want to smell them!  My mom made us put the shells into plastic bags and freeze them until trash day.  So, yeah, steamers aren’t for everyone.  But if you like them, this is the way you should be cooking them!

When my dad and I made these, we simply boiled the steamers until the shells opened then dipped them in melted butter and they are absolutely delicious just like that.  However, when I met my husband and had steamers Portuguese style for the first time, I realized we were missing out on some serious flavor.  My mother-in-laws recipe includes chunks of red onion, chorizo, red potatoes and even hot dogs.  Not only do these ingredients add some flavor to the steamers themselves, they also make a delicious broth that you can dip the steamers in.  Actually, my husband drinks the broth right out of a bowl while he is eating the steamers.  I don’t know if I want to admit that out loud, but there it is.

Does anyone want to hear a funny steamer story?  When my husband and I were dating, we decided to try making steamers ourselves at his apartment.  I had helped my dad make them since I could remember, so I was well aware of the process.  We bought a couple of pounds from a fish market.  When we got them home and started to clean them, it dawned on my husband that the steamers are alive until you boil them.  He COULD NOT bring himself to cook the little guys!  We drove them to the Seekonk River and set them free.  I’m pretty sure they wouldn’t have lived too long in that fresh water, but it made future husband happy.  It was many years before we could actually go through with cooking the little clams.

There are some things you should look out for when buying steamers. First of all, here in the Northeast, you can buy them at pretty much any supermarket.  I’ve bought them at supermarkets and they are ok.  I prefer to get them from a fish market, which can be a bit of a process if you don’t have one local.  And I don’t.  However, I was at a Farmer’s Market this past weekend and there was a fish vendor!  I was slightly grossed out at the thought of buying fish from a farmers market because I was imagining fish on ice in the heat, but that was not the case.  The fish guy literally had a little table, empty, in front of a van and all of the fish were packed inside the van on ice and air conditioned.  That worked for me.  I made sure to take a look at the steamers.  The one’s I bought were already packaged in netting, so I could tell that they were all mostly on the smaller side.  When it comes to steamers, smaller is better.  The smaller the steamer, the sweeter.  Plus, even this die hard steamer lover doesn’t like to eat a gigantic steamer belly.  So, definitely look for the smaller steamers.  Finally, you want to check for broken shells.  Because the steamers I bought were already packaged in netting, I couldn’t tell if there were any broken ones jammed into the pack.  Sadly, there were.  Sad because you can’t cook the broken shell ones.  If the steamers shell is broken, it is probably dead and may have been dead for a while and that’s just gross. So throw away any broken shell steamers.

Ok, ready to cook these suckers?

Salt and Pepper to taste