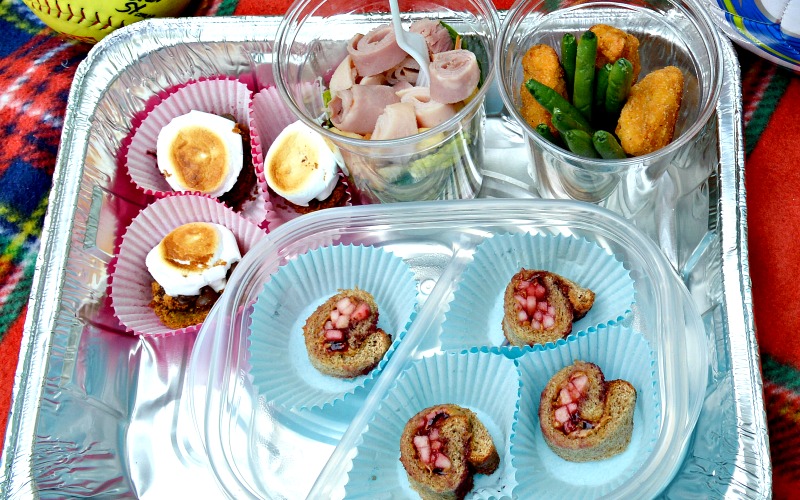 My daughter is on 3 softball teams.  Do you know what that means?  It means that we spend 5 meals a week at a softball field for the next couple of months.  Minimum.  If there’s a weekend tournament, we’re basically camped out at the field for 2 and half days straight.  That’s a lot of junk food we could potentially be consuming.  Last year we definitely had a lot of sandwiches and rushed takeout at dusk after games.  Not this year, friends.  This year, I’m prepared.  I’ve come up with some quick and easy options that will make dinner (or lunch) fun to eat and they even include vegetables (or fruit).  Here is my Ball Park Food – What to Eat When You’re at the Little League Field.

Kid Friendly Salad in a Cup

Up first is a kid-ified version of the Salad in a Cup that I’ve posted about before.  One of the great things about a salad in a cup is that it isn’t terribly difficult to make slightly different versions all at once.  Just gather all of your ingredients and you can let your kids and/or husband fill up their cup with whatever they like and everyone is happy.  Just remember to add the dressing first, then a dense vegetable, then your lettuce and then whatever else your little heart desires.  For this kid friendly version, I used Ranch Dressing, some chopped red pepper, romaine lettuce, some rolled and then sliced ham and turkey and a little bit of chopped apple.  Pop a fork through the hole in the lid and you are good to go.  Don’t forget to shake it before you eat it to distribute the dressing.  That’s the fun part, after all.  I’ve never been able to find the clear solo cups with lids at my grocery store, so if you’re in need of those, here’s a link to purchase them through Amazon:  16 oz Clear Cups with Lids. 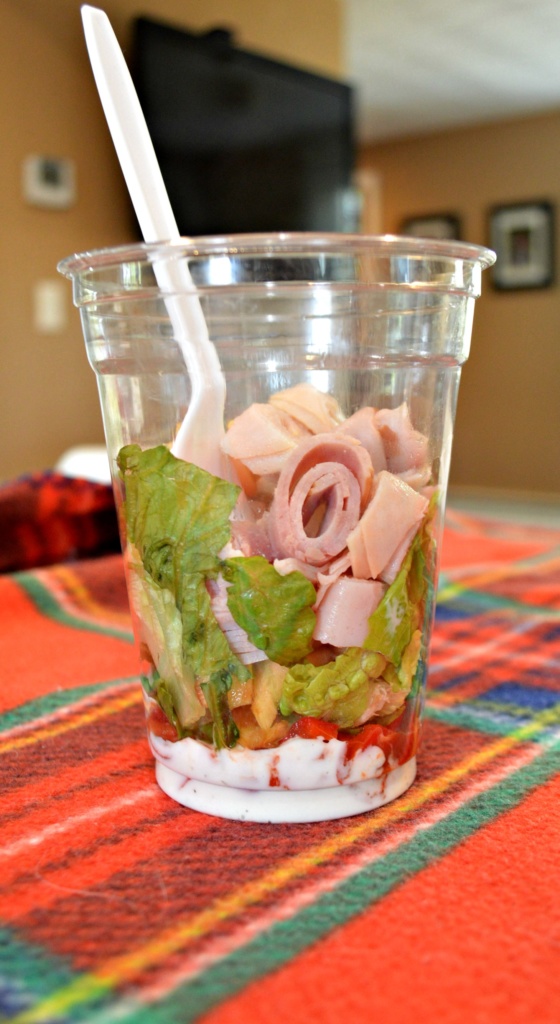 Chicken and Green Beans To Go

Continuing with the “In a Cup” theme, I’ve got Chicken and Green Beans to Go.  This is so simple.  I pop some frozen chicken fingers in the oven, blanch some green beans (just boiled enough to soften them a tiny bit), add some Ranch dressing to the bottom of the cup and when the chicken and the green beans have cooled down a bit, pop them in the cup.  These are brilliantly portable and green beans as finger foods are definitely a win.  I totally enjoy eating this, but what’s better than that is that my kids do, too.  While it’s great fuel for the one who’s playing softball, it’s also something sort of fun for my son who spends a LOT of time watching his big sister pitch.  He gets his own time, too, but the poor child watches an excessive amount of 12u softball.  I have to try to make it as enjoyable as possible for him. 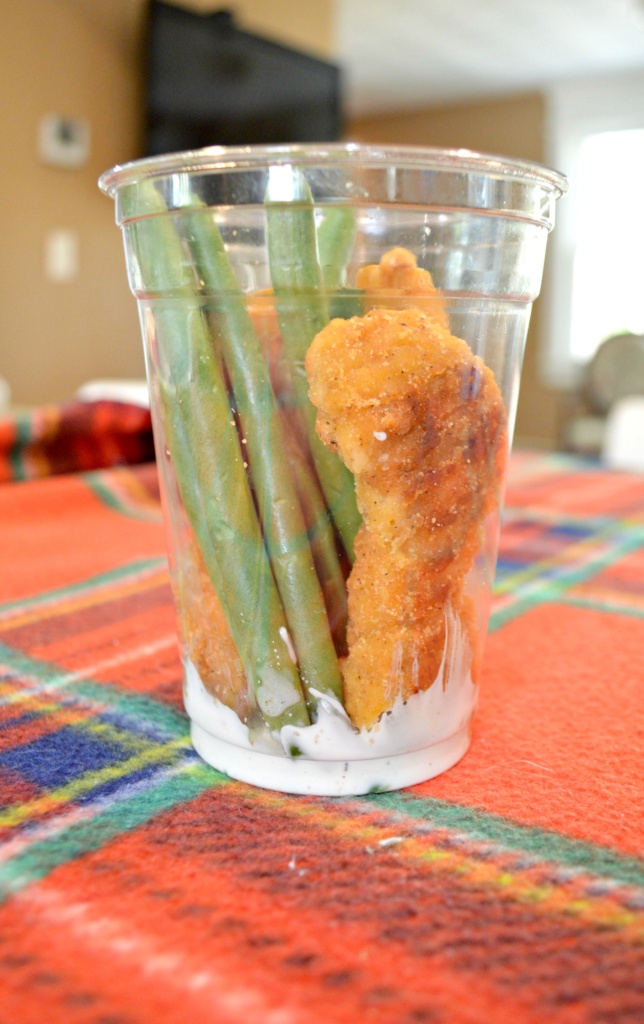 Okay, we’re going outside the cup to something a little kooky.  Peanut Butter and Jelly Sushi.  Don’t worry there is no fish in it.  This is super simple and fast to make.  You just take a piece of bread and flatten it a little with your rolling pin (or the jelly jar, I won’t judge).  Slap some peanut butter on it, then some jelly and then go the extra mile and julienne (cut thin strips) a little bit of apple to add as well.  Add the julienned apple to the top portion of the peanut butter and jelly and then roll it as you would sushi.  Slice into pieces and you just made some fancy PB&J.  &A.  Honestly, this one is probably my favorite. I LOVE peanut butter and jelly, but I don’t eat it very often because I try to avoid the gluten in the bread, but I couldn’t resist these when I was making them.  The little bit of tartness from the apple really makes these special.  These are going to be a hit, I promise. 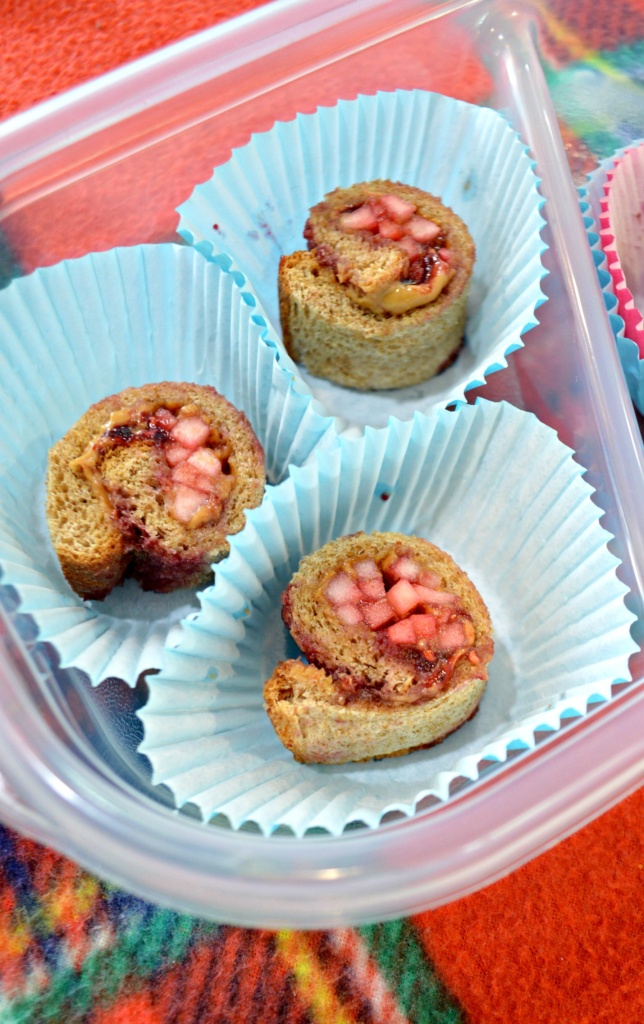 And, last but not least, a little portable dessert.  I found this fanastic recipe for S’Mores Cups at  The First Year Blog . First of all, these are amazing.  Second of all, everything else on that blog looks amazing, so when you’re done here, go have a looksie, ok?  I love the idea of taking a classic outdoorsy food item like a S’More and cooking it in the convenience of your oven to then be eaten outdoors.  Makes total sense since they unfortunately don’t allow fires at the Little League fields.  Sticklers for safety. 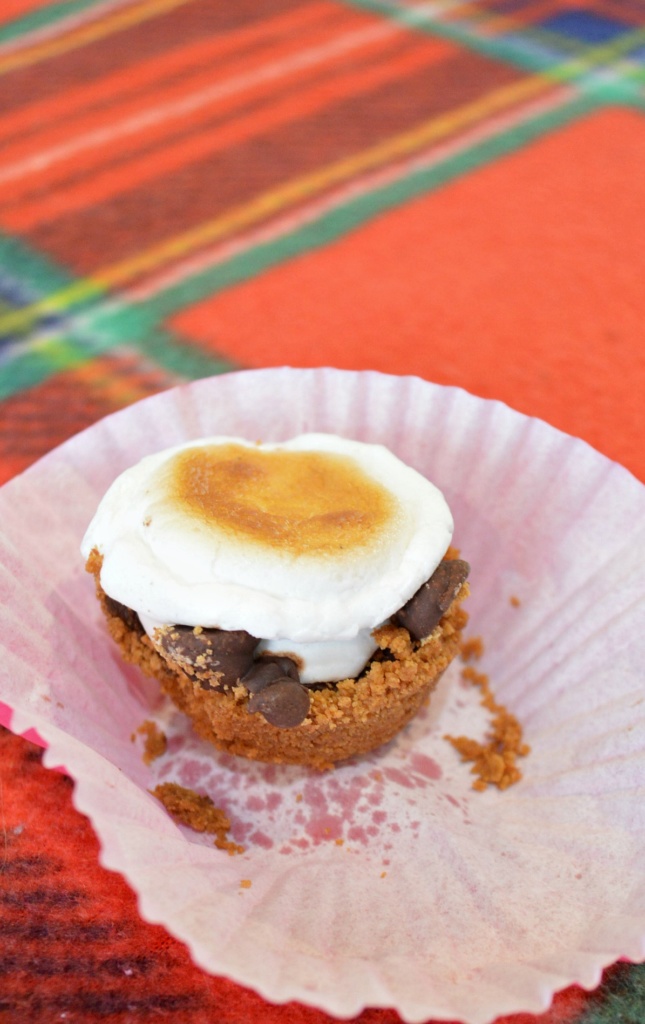 Now you are officially ready to feed yourself and your kids in style at the ball fields.  No more Taco Bell at 8pm on a Tuesday night!  Well, maybe sometimes.