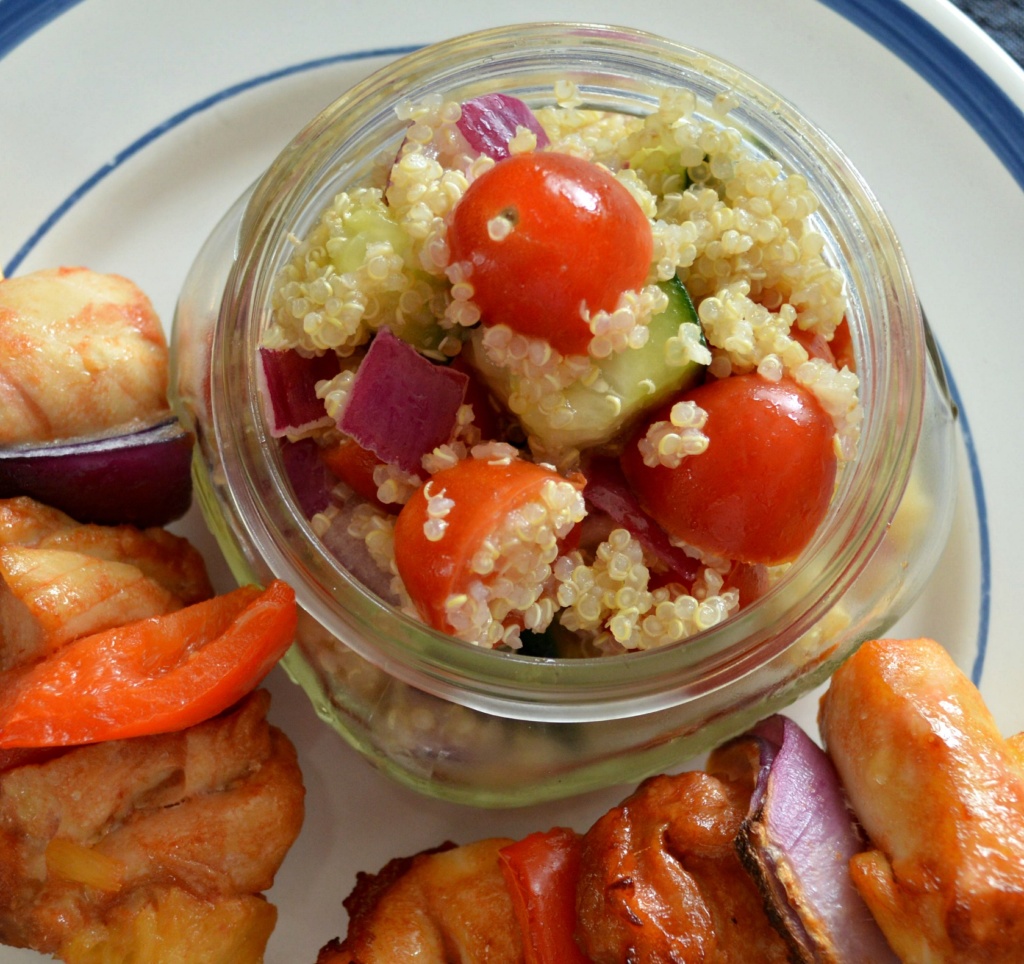 I made my first quinoa recipe a couple of weeks ago and now I’m all about the quinoa.  I like the texture it gives to whatever you decide to add it to.  This week I made a super simple Quinoa Peasant Salad as a side dish to Hawaiian Chicken Kabobs that I had pinned from Cooking Classy.

The Hawaiian Chicken Kabobs were delicious.  I ended up baking them in the oven because apparently it’s still too early to set up the grill.  Because we’re getting a snow storm tonight in New England.  I don’t even want to talk about it.  Not only are we getting a snow storm, but someone thought it would be funny to tell my kids that they might not have school tomorrow.  8 and 11 year olds don’t hear the “might not” part.  They hear “snow” and “school” and immediately start planning on sleeping in and deciding which hill they are going sledding at.  Anyway, my point was, I didn’t grill these, but they would have been even better with some grill marks on them, for sure.

1/2 c Italian Dressing (your favorite store bought will do)

I also promised a few weeks ago that I would update weekly how I’m doing on my weight loss journey.  It’s not going well.  I’ve been wearing the fitbit every day and it is motivating me to move around more, although I don’t often make it to 10k steps.  I have been using my elliptical more lately and for longer periods of time, like 30-45 minutes.  I’ve been eating sort of not great.  When I plan a meal, I’m good.  If I have a not very bad for me sweet already made in the house, then I’ll eat that.  If I haven’t planned ahead, I’m done.  I eat whatever I can get my hands on, like munchkins or brownies or cookies.  I don’t keep that stuff in my house, so it’s usually when I’m popping in to visit at someone else’s house that I get tripped up.  Zero self control people.  Zero.  My new mantra is “What did you do today to reach your goal?”  That has actually gotten me out of bed and onto the elliptical.  My favorite thing so far about the fitbit is the sleep tracking.  I always thought I was getting pretty close to 8 hours of sleep every night.  Turns out I don’t usually get even close to 7 hours every night.  No wonder I like naps.  Just kidding, I could take a nap no matter how many hours I slept the night before.  Anyhoo, all in all, I have not lost any weight.  In fact, depending on the day, I have gained back a little of what I lost from The Bone Broth Diet.  Not very encouraging, but I’m going to refuse to let the scale bring me down.  You’re not the boss of me SCALE!
(Visited 264 times, 1 visits today)