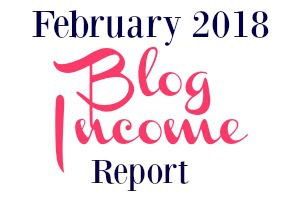 I’m ready to share my February 2018 Blog Income Report with you.  I really didn’t even want to write another income report. Because February was a doozy.  February was a lesson in stick-to-it-iveness.  Of resilience.  Of not giving up even when you feel like you’re a giant failure.  February was all work and no results.  And all of that negativity was probably a good thing.  Follow along with me in this tale of woe that hopefully ends up bearing some fruit down the road, won’t you?

***Update 5/1/2018 The links below are no longer affiliate links.  I love Billionaire Blog Club so much, I got them to hire me!  I’m the Community Manager for BBC, but everything you’ll read below holds true, 100%.  I couldn’t be prouder to be a member of the BBC Team.***

In January, I had over 100k pageviews.  That was a pretty awesome milestone for me.  I got into Mediavine which is a premium ad network and helps pay the bills around here.  I was pretty darn full of myself in January.  I thought for sure there was no where to go but up, right?  I actually remember thinking, well, February only has 28 days, so maybe I’ll just eek out 100k again…  LOL.  Not so fast.

After having such an exciting January, February has been such a downer that I don’t want you, my dear reader, to read this and think, “Yup, blogging is a fly by night thing.  I’ll never try that”.  Because blogging is not a fly by night thing.  It can absolutely be a roller coaster at times, that is without a doubt, and I was not prepared for that.  Having a January where I doubled my stats from December, is not the norm, just as much as halving my stats from January to February is not the norm.  There may not even be a norm, in fact, from month to month, but so far, the overall trajectory for me, has been moving in the right direction.

Let’s take a look at the numbers for December, January and February and maybe this will make more sense. 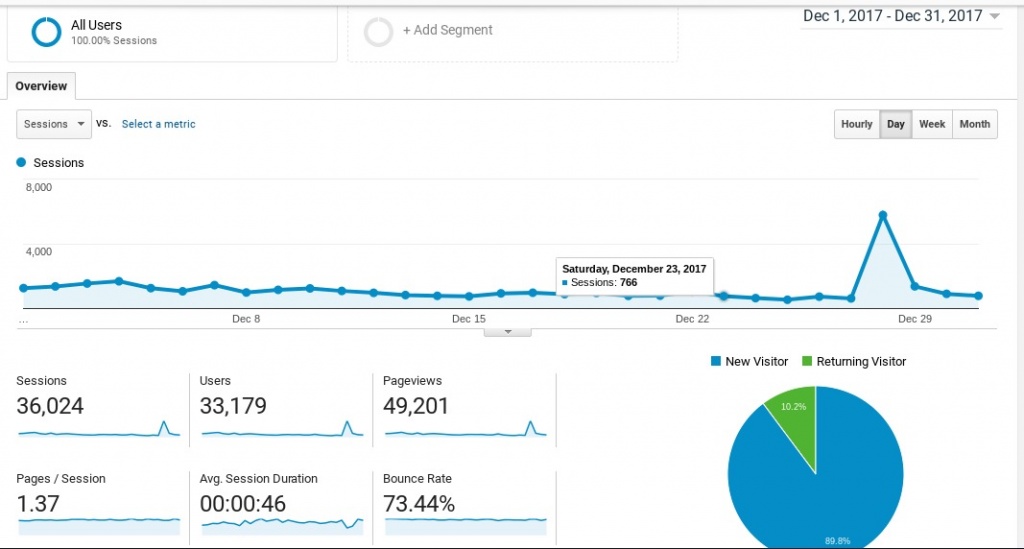 Mediavine Ads: $0 – I wasn’t active in Mediavine in December 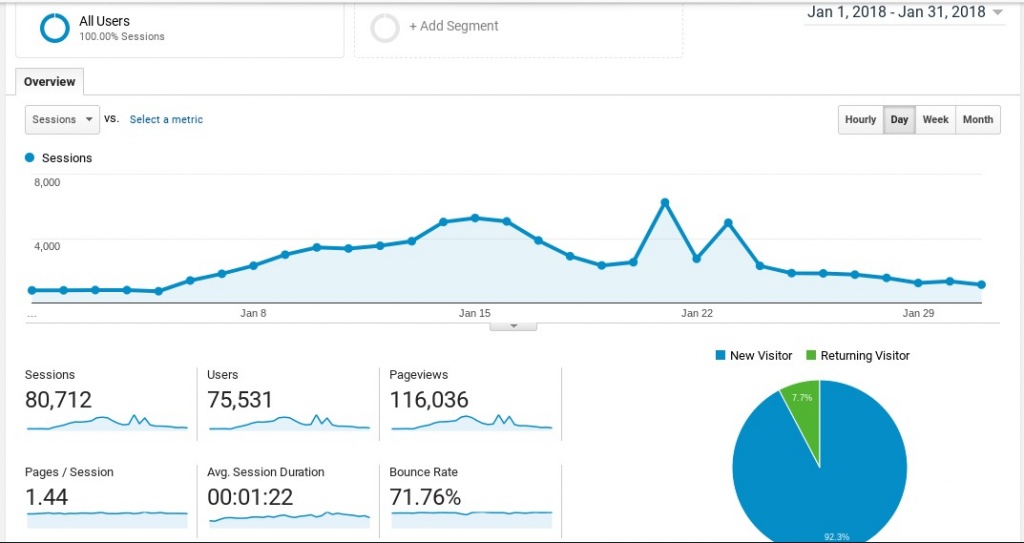 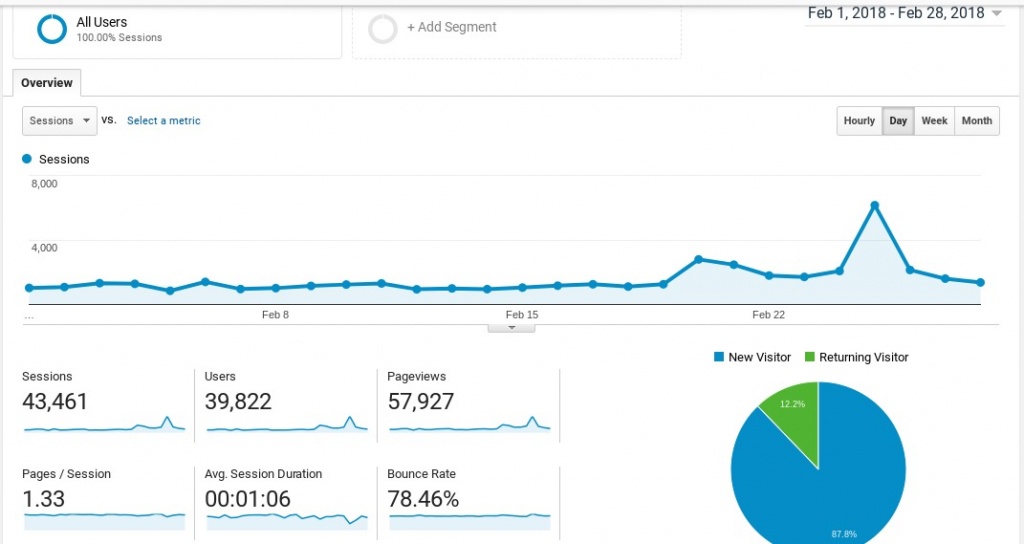 In case you’re like me and you can’t remember after scrolling past all of those crazy graphs what the page view numbers were, here they are again:

Ok, so, seeing those three months all up close and personal, what sticks out to you?  What sticks out to me is that JANUARY was the anomaly here, not February.  If you take January out of the equation, I had an increase of over 8700 pageviews when comparing December to February.

Now does February seem like such a terrible month?  No, it doesn’t, does it? Especially considering that February has three less days than December.

So this is a snippet of the type of roller coaster that you get on when you become a blogger.  You will have months where you have two pins take off at the same time AND a feature from a major blog and your stats will be over the moon (January) and then you might follow that up with what is a more “normal” month right after that and still feel like you’re doing something wrong.

You’re not.  (Or you might be and that’s when you want to be sure you’re in good hands as far as your blogging education goes.  More on that in a minute).  This is what renowned blogger Paul Scrivens of Billionaire Blog Club calls “the ebb and flow” of blogging.

Now just because I have begun to accept this so called ebb and flow does not mean I am not doing everything in my power to continue to stay more often with the flow than the ebb, ok?  What may be the blessing of this yucky February is that I worked really hard to try to get pageviews in February.  I made new pins for my most popular posts, I worked on SEO, I wrote posts on popular topics and I worked on creating a new opt in for you all which you may or may not have noticed yet, but will probably pop up for you just as you are about to leave!  I’m hoping that these things pay dividends in March.  We shall see.

And I don’t want to gloss over the fact that I earned over $700 in the month of February. It’s not a full time income yet, but until I quit my day job, it’s $700 of fun money! Whatever will I spend it on?  (I’m terrible and I’ve already spent part of it on camera equipment.  Oops.  That’s why I’m not a personal finance blogger).

Now, you’ve made it to the end of my tale of woe (or not woe) that was February.  I want to tell you now that I very likely would have given up this whole beautiful disaster if it were not for the best blogging resource that money can buy, Billionaire Blog Club.  And, yes, I’ve done EBA (Elite Blog Academy).  And it doesn’t compare to BBC.

I could tell you that EBA was pretty good, too and you should totally try both and slip in an affiliate link for EBA  and I’d be rich by the time EBA opens.

But, I won’t do that to you.  Because if you are a blogger or you want to become a blogger, you need to save your pennies for Billionaire Blog Club and get in as soon as the doors open up again (early April!).

In fact, if you sign up now for the BBC Free Blogging Boot Camp, you’ll be ready to bust down the doors to BBC when it opens again in a few weeks.

PS! If you’re wondering if you’ve got the right temperament to be a blogger (it takes guts, moxie and sometimes a general thick headedness to protect you from injury while banging your head against the wall), check out the post 11 Questions with Billionaire Blog Club Founder Paul Scrivens.

2 thoughts on “Blog Income Report – Was Your February as Bad as Mine?”