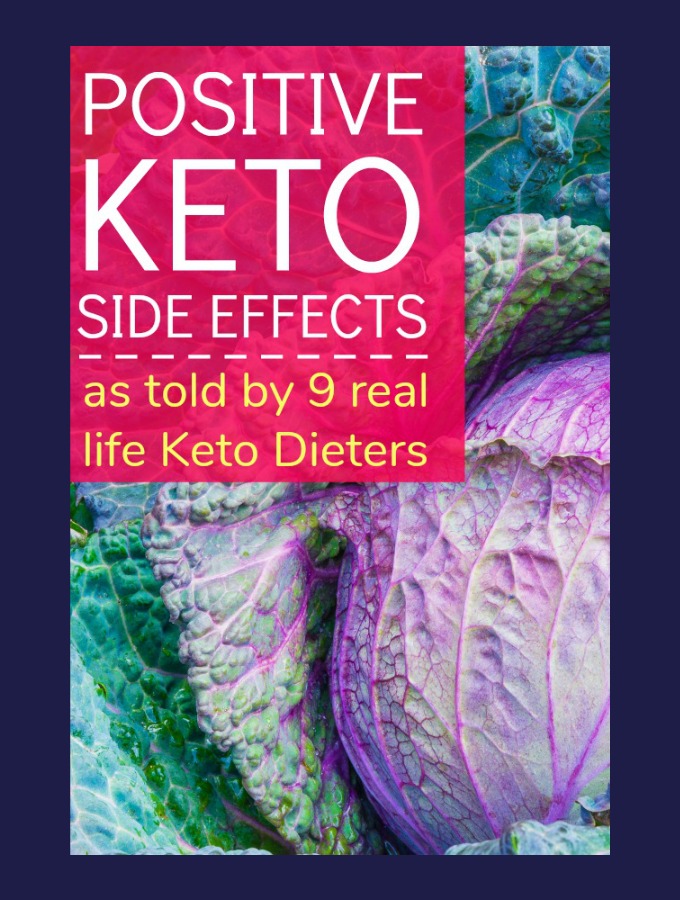 I have officially been on the Keto diet since November of last year.  8 months.  I’ve lost weight. I could stand to lose a little more.  However, if I never lose another pound, I will never stop eating Keto.  Because there are some positive keto side effects that I am not willing to sacrifice.  Other than the weight loss.  ***This post contains affiliate links. If you click one and make a purchase, I may receive a commission at no additional cost to you.*** 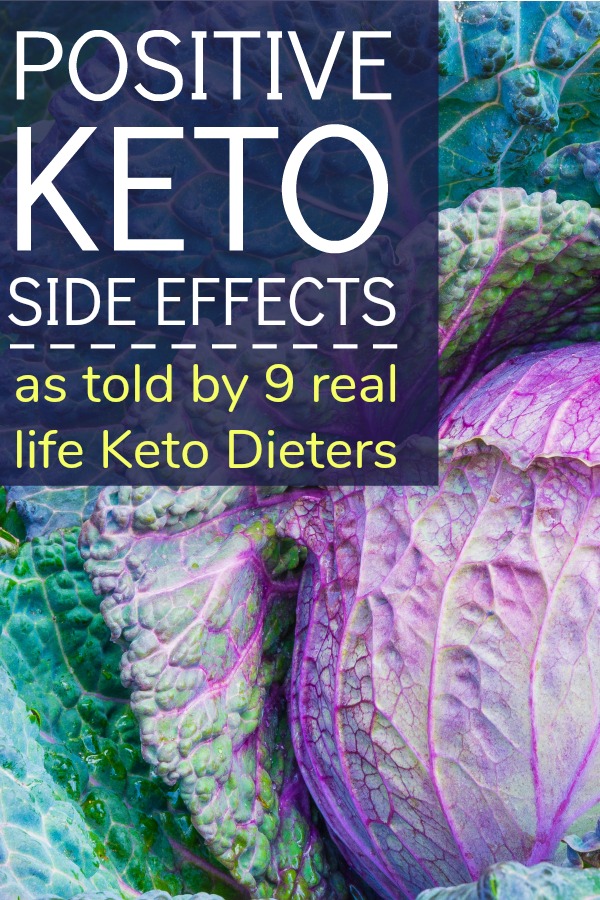 First, I have to mention, I learned about the Keto Diet from Keto Bootstrap.  You should, too!  Check them out.

The idea of this post came about when I was chatting with a fellow Keto diet groupie.  This is a person that I talk to daily. We had both had a couple of down days.  I knew I had been cheating a little too much on Keto.  She had just gotten back on the Keto train.  So we were both in the “I’ve gotta get back in ketosis” phase of the Keto diet.

About two months after I started Keto, my husband turned to me and said, “You laugh more now”.  I don’t know what we were talking about or why I was laughing, but he was right.  Which is a gift.  I don’t know why I laughed less before or what changed after starting this diet that I now laugh more, but how joyful is that?

I’ve always been a person whose emotions are right at the edge.  I’m quick to cry, quick to smile. But now, there’s a joyfulnesss, a light heartedness, a mad happiness that I can’t explain.  I have no idea what actually has caused it, but there are lots of articles about Keto and mood that support the idea.

(On the flip side of that coin, in my very informal survey of my Keto friends, one of them had to stop Keto entirely because it made her depression worse.  So, obviously, I’m not a doctor, talk to your doctor about this stuff. )

But shiny, happy me isn’t the only side effect.  I’m also more focused.  My memory seems to be better.  My hair has grown like a weed.  My hair has never grown past my shoulders and it’s on it’s way to mid-back if I let it go.

BUT THAT’S NOT ALL!

I’m not tired like I used to be.  I have energy to do stuff.  This could very well be simply because I’m not carrying around an extra 25 lbs every day, every where I go.

One of the very best side effects of Keto has been that I rarely get aches and pains anymore.  Before Keto, I had pain in my ankles, knees and feet that prevented me from walking down the stairs well in the morning. I used to actually worry about if something happened and I had to quickly get out of bed and out of the house with the kids that I wouldn’t be able to move fast enough to get to them.  I have none of that pain anymore, whatsoever.  I have one nagging old gymnastics injury that will not go entirely away, but it definitely comes around less often.

So as I started to think about all these sort of weird side effects I was getting, I decided to poll some of my online friends to see if there was any type of pattern.  Turns out a lot of people had sort of weird positive side effects!  And a few negative ones, too.

Here are, in their own words, the positive Keto side effects from my best internet friends.

“When I get into ketosis my mood drastically improves.  So much so that my anxiety, which can sometimes keep me housebound, just disappears.  I mentally feel like a completely different person.
I am eating keto, not for the weight loss this time, but for the mental clarity I get from being in ketosis.
When a diet can change my energy, focus, and happiness in a few short days why would I eat any other way.
The weight loss is just a bonus.”

Rhoda from Rhoda Design Studio
Keto Benefits = less inflammation, less brain fog, more energy (weight loss stalled for me over 3 months ago…and I still have at least 20 to lose). I keep going because my fingers don’t swell and I hardly ever get a headache anymore (they were once a day with migraines thrown in before). Psoriasis on my hands disappeared.

Kristiina from Getting Unschooled

Warning: this post is TMI *** I’ve been eating Paleo for 8+ years, so transitioning to Keto was pretty easy for me (I had been slipping in and out of ketosis during times of extreme carb restriction, but just didn’t know that’s what it was called LOL AND I thought I was doing something ‘bad’ once I realized I was doing it. I had a urine test at the doctor’s office and the nurse was like, why do you have ketones in your urine? I thought I was hurting myself because they were so weirded out—AND because my urine smelled….a tell-tale sign for me that I have ketones in my urine).

What I love about it is going even longer stretches without getting hungry….I hate cooking and making food, so I keep things very simple and this way of eating helps with that LOL. The other biggies are more even moods, more energy, and it definitely helps with hormones—let’s just say I’ve been out of ketosis for about a month and holy hell I’ve been the CRAZYPMSMOMMY this week and all I can think of is I HAVE to get back into ketosis so that I can just feel like a normal human (for the most part) without any mood swings LOL. My family will thank me, I’m sure.

You didn’t ask for negatives, but for me, it completely constipated me. Like going every 5-6 days. I tried ALL of the remedies and some worked, but they made me feel gross. So I just kind of learned to go with it. I think that’s partly why I’m out of ketosis right now–I have a little chocolate pot that I make myself with dark chocolate, shredded unsweetened coconut and sunflower seeds. I need a little sugar to get things moving, you know? (And do I get the award for the most TMI post on here?????!) The other negative for me is I HATE cooking and while I generally can eat the same thing and not get bored, I find that trying to get enough fat can be a challenge if you’re not willing to do more than drink straight from the olive oil bottle. My two sisters tried Keto and I swear that’s all I heard them complain about: I’M SO SICK of eating freaking AVOCADOS. hahahaha! Sadly, they didn’t stick with it…

Anyways–I don’t think it’s a fad. The results are stunning for so many people…xoxo”

“I got into Keto to increase my energy. I was eating a lot of sugar and having horrible hypoglycemic episodes. No more hypoglycemic episodes, the bloating is gone, I have more mental clarity, no more dizziness, more energy and lower blood pressure. I have lost 27 pounds. I did have a bout with low potassium which was pretty scary. I think that was brought on by a combination of Keto and BP meds (I don’t take the meds anymore). I am not as strict as I used to be with Keto, but I still limit bread, rice and pasta. I do enjoy an occasional dessert.

I also agree with reduced appetite.”

Becky from Simple and Sane
“The biggest changes for me have not been in the weight loss department so i need to make a few tweaks to get that moving again. My biggest pluses have to be mood – other than one bad day I’ve been a peach to live with (I’m sure). I have much more mental clarity and ability to focus. My short-term memory is better. I’m post-menopausal but still getting night sweats and it’s helped tremendously with that. I battle depression and I’ve been helped SO much in that regard. My sleep is improved – I don’t get more sleep but I get better sleep. I’m non-diabetic hypoglycemic and now I can go for several hours without eating without feeling like I’m about to pass out. And I was able to get my wedding rings off!”

Joelle from Kali Zone
“SIMPLE MEAL PREP
Neither my husband or I enjoy cooking. Even eating is sometimes a bit of a chore – which led to us eating the wrong things.
Keto meals tend to be so simple and can be thrown together quickly and easily without too much thought. It has taken so much stress out of our lives.

Oh yes – I forgot a big one. But for my husband, not me. He suffers from ibs- we had years of doctor and specialist visits, trying all sorts of medication and diet changes. Nothing helped much and he was just getting worse. Keto (with intermittent fasting) has had the biggest impact so far in improving the symptoms.
We actually tried Keto to ‘prove people wrong’ and that it wouldn’t actually work (we came from being strong vegans). And we were proven wrong”

Dana from Piwakawaka Valley
“I have only been doing it for about 12 weeks. I have no idea how much weight I have lost because I don’t own scales, but I am down a dress size, so that is nice.
I have PCOS and the underlying driving force behind pcos is insulin resistance, my dad is diabetic, my mother is pre-diabetic. I have adopted keto for a long term way of eating to avoid these issues. We used to be paleo, then I got pregnant with number 3 (who is now 3) and it all went out the window! So far on keto I have found:
my cycles are more regular
hair is less oily
I sleep better*
not tired all day anymore*
Less headaches
no bloating
my hands aren’t puffy anymore*
weightloss
clearer skin
I’m no longer hungry all the time*
I no longer crave sugar all the time*
* really big deals for me as these have been ongoing (my whole life) issues for me!”

Keto, for the 9 people above, is clearly about a LOT more than weight loss. If you’re interested in learning more about the Keto Diet, Elisa at Keto Bootstrap has you covered. Keto Bootstrap has meal plans, exercise plans (which I’m totally going to do someday, I SWEAR!), grocery lists and a community where you can get all your Keto questions answered! 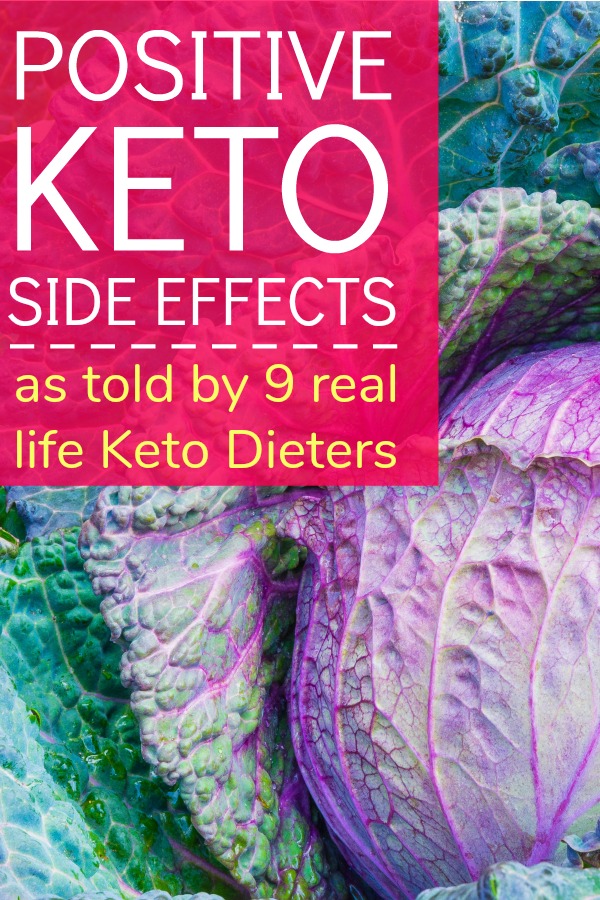 4 thoughts on “Keto Side Effects No One Talks About”